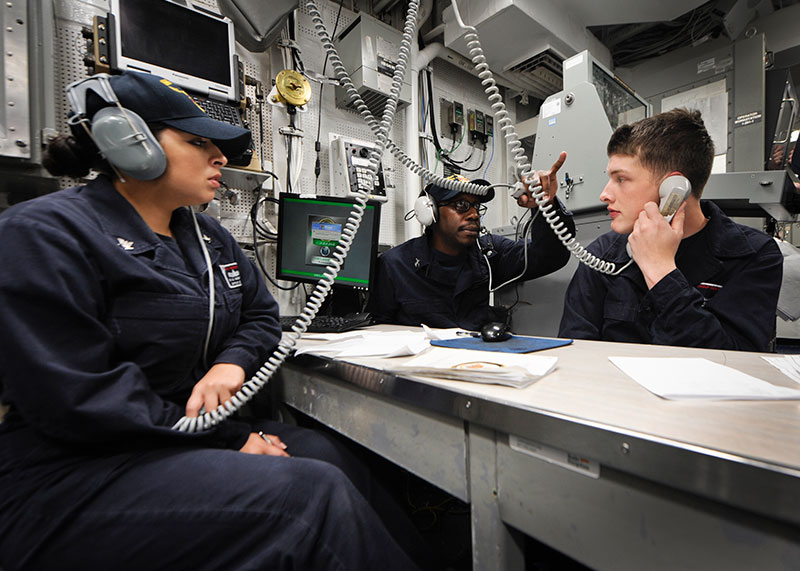 The challenge requirements are listed in blue; ASTi's applicable components are

Diverse Comms in One System

Model new and legacy comms equipment and integrate them into one system.

The U.S. Navy needed a communication system that simulated various equipment onboard actual ships, including the following:

To meld older technology with newer software interfaces, ASTi engineers studied and tested the equipment to understand how it communicated and interacted. ASTi leveraged its 32 years of comms simulation experience and product development to simulate and connect replicas of each piece described above. The result was a versatile communication system that allowed each room to function separately or all of the rooms to work together as a single entity. It communicated across a WAN at multiple sites or on a LAN in a single location.

Manufacture working replica of a military radio onboard the ship.

The radio models are configurable for a variety of training scenarios. Users can construct radio presets using standard parameters (i.e., frequency, modulation, frequency hop modes, and crypto fills) for quick and efficient distribution to all radio simulators. They can also create and store multiple sets of preferred exercise configurations for convenient setup and rapid deployment.

Since the contract deployed months late, the customer needed a fast turnaround to satisfy the government’s demanding training schedule. In response, our technical staff worked overtime to design, develop, and install this complex system without compromising quality. Most deliverables of this scope take a year or more to complete, but ASTi finished the project on time in under six months.

The U.S. Navy needed a communication system that resembled actual shipboard equipment but only simulated required training features. To meet this challenge, ASTi modeled the SVS, growlers, SPT equipment, and programmable terminals that worked just like the original technology. To fit the customer’s training needs, ASTi made slight functionality modifications to the programmable terminal’s GUI. Our software didn't just model existing functionality: it also interfaced with other equipment via telephone, the announcing system, and virtual radio channels. As a result, trainees could communicate using every piece of the training system, just as they would on the actual ship.

The customer needed more than a functional IOS application: they needed a thoughtful design that was easy to use. To meet this challenge, ASTi developed a cutting-edge GUI that monitors any channel or endpoint on an uncluttered touchscreen. This application can view over 100 channels across 60 endpoints on a screen smaller than most laptops.

Develop an Instructor Operator Station (IOS) interface that instructors can use to monitor and interact with students in the exercise.

ASTi developed an adaptable instructor comm panel that combines the functionality of other stations into one. Instructors also use the IOS to monitor student communications, view the status of multiple channels, and role-play on-trainer and off-trainer stations. Through a range of programmable keys, they can complete a range of activities:

Administrators and instructors can monitor and configure network settings and system health in the Voisus web interface.

Radio-over-IP and VoIP for training and operational communications