ASTi recently installed a Telestra communications and aural cueing system on a unique type of fast jet simulator: the ATFS-400 Phoenix flight simulator from Environmental Tectonics Corporation (ETC). The ATFS-400 is a centrifuge-based platform simulator which adjusts its cockpit module's position on multiple axes to realistically simulate the physical forces of high-speed flight.

The platform also features a modular, reconfigurable cockpit which can be changed to simulate one of several supported airframes such as the F-15, F-16, and others. Instead of sitting idle, any cockpit not attached to the motion platform can be used in its fixed configuration, allowing simultaneous training alongside the pilot in the centrifuge.

ASTi was originally contracted to provide audio and comms for a single cockpit with two instructors. Shortly before its demonstration to the U.S. Navy, however, ETC asked ASTi to triple the sound and communications capability of the Telestra system to accommodate additional aircraft simulations.

ASTi responded by expediting hardware production, and accelerating model development. An application engineer from ASTi traveled on-site to support ETC in the days leading up to the demonstration. The ASTi engineer tuned models in real-time based on pilot feedback, and suggested solutions to challenges that ETC considered impossible given the compressed timeline. As many requirements were still evolving during system installation, ASTi's on-site support was critical to the demonstration's success.

For more information on ETC: http://www.etctacticalflight.com 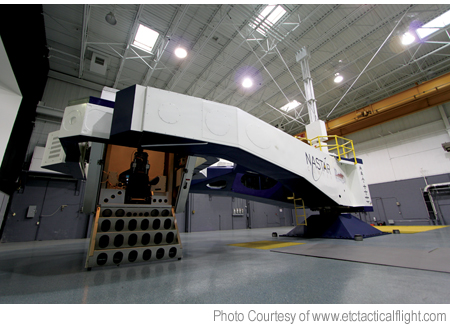