During the update process, the pilot identified a need for additional aural cues caused by air resonating around the aircraft based on airspeed and altitude. Using the pilot's input, ASTi's engineer was able to tune the model quickly and efficiently with the agile model development software. The ability of the ASTi sound system to position sounds at various locations within the cockpit further enhanced the simulation. Due to the ASTi updates, the simulator is slated to be used for carrier approach training.

ASTi also conducted on-the-job training for the site's engineering staff during the one-day trip. The customer's proficiency with ASTi's software allowed them to perform final tuning, as well as handle any future maintenance tasks.

The F/A-18E/F Super Hornet is a twin-engine, multi-mission fighter jet developed for a variety of combat operations. ASTi has provided the simulated communications and aural cue systems for the F/A-18 training program since 1989. ASTi has been providing networked communications and aural cue solutions to Pax River NAS facilities for over a decade. 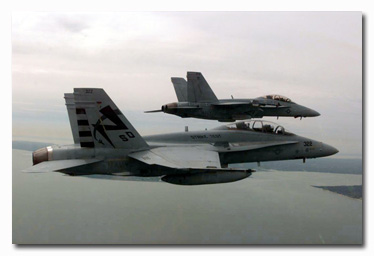 Image courtesy of the U.S. Navy.

Image courtesy of the U.S. Navy.