Advanced Simulation Technology inc. (ASTi) has announced the delivery of significant communications upgrades for Tornado GR4 simulators in Northern Italy. The Tornado GR4 is an all-weather, day or night attack and reconnaissance aircraft capable of supersonic flight that was developed in the 1960's, and is a popular aircraft to simulate for training purposes throughout Germany, Italy, and the U.K.[1] The latest ASTi upgrade was sought out as other, non-ASTi related, upgrades were being made; it encompasses both hardware and software components.

The software upgrade includes the replacement of a 1st generation Digital Audio Communications System (DACS) model, built and integrated in 2002, with the 4th generation ASTi-built Telestra model. Although the DACS model was built 13 years ago, it was still in excellent working order, allowing for ASTi engineers to quickly convert it directly to the latest-generation ACE Studio software. Additionally, an updated communications package incorporated new SATCOM and high-frequency radios to an existing ASTi radio library.

The hardware update boasts the replacement of DACS hardware with the latest Telestra servers. This update proved to be cost and energy efficient, as each simulator required two DACS servers, but only requires one Telestra server for premium comms and aural cues capabilities.

This update is currently ongoing as ASTi provides online support throughout the integration process. The Tornado GR4 simulator is just one of 11 installations that ASTi has fielded in Italy. ASTi also supports GR4 simulators in the UK that are still running 1st generation DACS systems. For a full list of ASTi's international installations, including those in Italy, visit the Installations page. 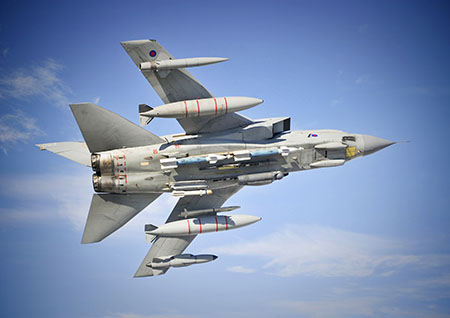 Image courtesy UK MOD. © Crown Copyright 2012. Photo by: Corporal Mike Jones. We know it's not an Italian aircraft, but this is a cool photo!

ASTi has been at the forefront of distributed voice innovation, delivering products that unify voice communications across operational and training environments for the military, civil agency, and commercial marketplaces. Since 1989, ASTi has fielded over 11,105 systems at more than 800 installation sites in 49 countries, including the U.S. To learn more about ASTi, please visit www.asti-usa.com.

Image courtesy UK MOD. © Crown Copyright 2012. Photo by: Corporal Mike Jones. We know it's not an Italian aircraft, but this is a cool photo!